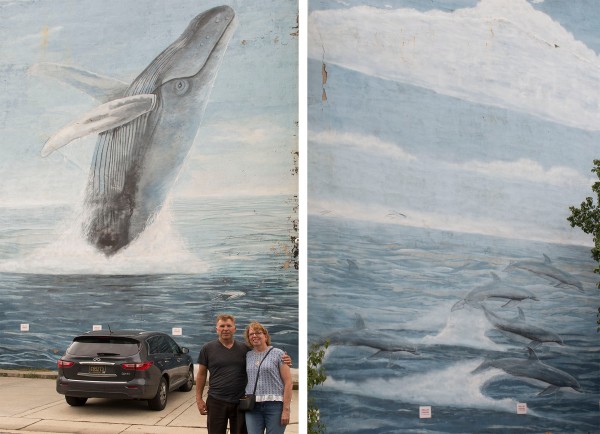 After failed attempts to see a wall in Philadelphia and Wildwood, we finally got to see  “Delaware Marine Mammals” in Wilmington. The wall is aged but the only original Wyland wall anywhere around this area. Right as we were finishing our picture the sky opened up and it started pouring rain, so we did not have an opportunity to spend as much time there as we would have liked.

Except from @wylandfoundation on Instagram
The front of Architects Studio on Market Street in Wilmington, Delaware, presented a special challenge for Wyland because the two walls were dissected by a wide external stairwell.

“This mural is essentially a diptych with two fairly vertical surfaces,” he explains. “To achieve more continuity on either side of the stairwell, I decided the mural would work better if both sides were above-the-surface paintings. So I painted a humpback in full breach out of the water on the left side, and a school of bottlenose dolphins skipping on the ocean’s surface on the right side.”

Situated near Wilmington’s Christina waterfront, which in the 1860’s to 1880’s, was the launch for whaling ships going up the river and through a bay to reach the Atlantic. “Painting a Whaling Wall in a non-coastal city always gives me an opportunity to reach people who would not normally be thinking about whales,” Wyland says. My intention is to expose as many people as I can to these animals so they’ll join, in whatever way they can, the movement to save our oceans and marine life”